Having established themselves as one of dance music’s most esteemed and visually creative duos to hit the scene, Pegboard Nerds possess an enviable resume that includes over 300 million streams across two EPs, Beatport number 1’s, and Billboard top charting projects. Today, the pair are returning with a brand new single to tide us over until their fall tour begins titled “Speed Of Light Pt.2.” 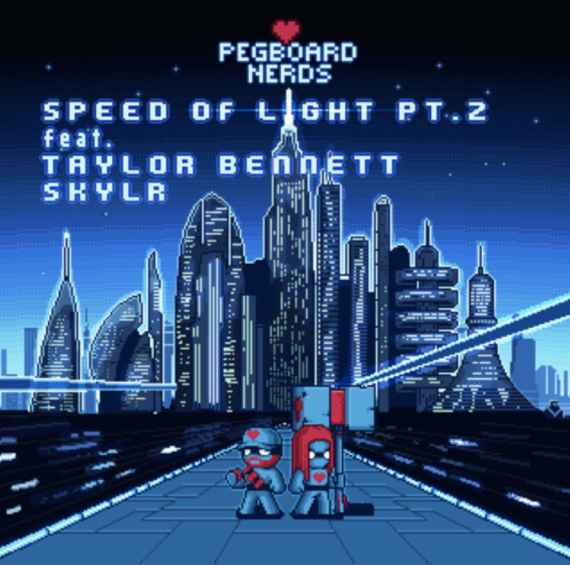 A collaboration with Chicago rapper and Chance The Rapper’s brother, Taylor Bennett, and Indianapolis rapper / producer Skylr, “Speed Of Light Pt.2” is a rework of the Nerds’ ethereal original single from earlier this year. For Pt.2, the Nerds chop and screw the original production by slowing the tempo and relinquishing some of the original’s more atmospheric elements to provide room for Bennett and Skylr’s poignant rhymes. Acting as a anthemic hip-hop dance music cross over single, “Speed Of Light Pt. 2” is a powerhouse collaboration for all four artists and represents one of the first major features for Bennett.

If unfamiliar with The Nerds before now, the pair are responsible for a uniquely all encompassing approach to their craft, with not only the release of music, but also the creation of animated alter-egos that personify the duo. Building their reputation by working with dance music’s more renowned artists includingSnails, Jauz, NGHTMRE, Cash Cash, and Krewella, the pair are also known for their commitment to charity with their 2015 EP ‘Pink Cloud’ raising $50,000 for breast cancer awareness within one month of release.

Fans, aka #NerdNation, can see Pegboard live beginning next week onOctober 20th for a number of tour dates in Los Angeles, Denver, New York, and more. Tour dates below and pick up your copy of “Speed Of Light Pt. 2” here