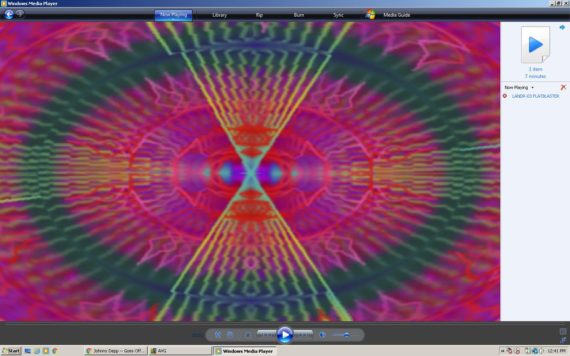 When a lad from Nottingham posted a video of him taking shrooms while watching the Felix video, a widespread underground Windows Media Player drug culture originated.

For years it was assumed the cause for Britain’s greatest drug epidemic of the last 25 years stemmed from out-of-control lads returning from the Spanish party island of Ibiza. There it was believed the Brits indulged in truck loads of mushrooms and ketamine. A habit they’d take home to the streets of Britain.

However, a 25 year study conducted by the University of Hadley now reveals Windows Media Player was the main factor of the problem all this time.

Windows Media Player was introduced in 1991, when Windows 3.0 with MultiMedia Extensions was released. Originally called Media Player, this component was included with “Multimedia PC“-compatible machines but not available for retail sale. It was capable of playing animation files, and could be extended to support other formats.

When British artist FELIX had a massive top 40 hit with “Don’ You Want Me” back in 1991, the video director decided to use Windows Media Player due to a severe lack of budget.

When a lad from Nottingham posted a video of him taking shrooms while watching the Felix video, a widespread underground Windows Media Player drug culture originated.

Massive amounts of lads would go to house parties, turn on Windows Media Player and take shrooms and ketamine to strengthen the effect of the visuals.

Previously a safe haven from any drug abuse whatsoever, the Brits then introduced mushrooms and ketamine to the Balearic island of Ibiza.

Most notably, the rise of EDM and the residency of Paris Hilton at one of the island’s most famous nightclubs were said to be an effect of the rampant drug use.

Talk some shit in the comments!

This is a breaking news story. More updates as they come in.