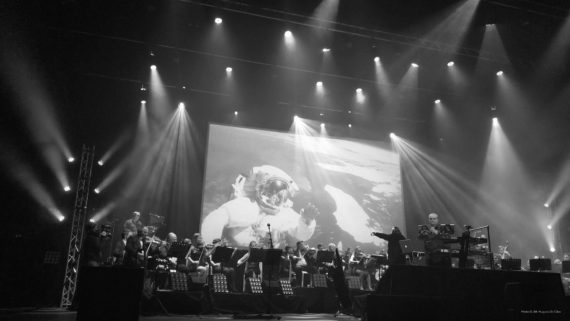 AstroVoyager, real name Philippe Fagnoni and born in France, can now give a glance at his successful concept albums Temporal Gravitation (2006), Symphotronic Lunation (2010), and ElectrOpera (2012). The highlights of his career so far include performances with the Tetraktys Ensemble for ‘ElectrOpera’ and its pyromusical outdoor version in 2014 as well as ‘Big Bang’, which was premiered in France last October with the Prague Concert Philharmonic. In 2017, Canadian artist Marco Grenier selected ‘First Lights (Original Mix)’ to be part of his warm-up set during the 2017 international electronica tour by Jean-Michel Jarre.

After the success of previous EPs Architect Remixes and First Lights Remixes via CosmXploreR, which featured remixes by the likes of Blackbird Blackbird or Deep Forest and saw support from tastemakers such as Clash magazine, Earmilk, Trax magazine, Keyboards Recordings and Music Week, electro-symphonic artist AstroVoyager will release his next endeavor, and full length LP with Prague Concert Philharmonic, entitled ‘Big Bang’.

AstroVoyager : “ ‘Big Bang’ synthesizes an interstellar journey. It is also a message of hope to our world where we must be the architects of the future… “ And AstroVoyager wants you to join him on this cosmic journey to travel through time and space together again. AstroVoyager’s new Big Bang will be released on October 27th. For this occasion, a release party is planned the night before on October 26th at « Le Triton » (Paris – France). Big Bang Vinyl, but also CD & live DVD and limited collector editions, are exclusively available for pre-order till the end of October at Pledge Music.